We have a proud 70 year history, serving our community.
Home
>
About Us
About Us
Our History
Wheeler Family Law
Probate Professionals
Brendan H. Hardiman & Associates
S.B. Powell & Co
Our Commitment
Our Values
Testimonials

We are a law firm with a focus on people

Hutchinson Legal is a local law firm with a long history in the Ringwood area. We have a strong line-up of skilled legal practitioners with an unwavering commitment to providing legal solutions for life. Hutchinson Legal seeks to provide a high-quality legal service for our clients at every opportunity. From the first consultation, we are committed to finding the best possible legal solution for our clients and to providing the highest level of support, communication and service, until the matter is resolved.

Contact us today to speak with lawyers who are committed to achieving the best for you. We’ll stand by you.
03 9870 9870

Hutchinson Legal is a local law firm with a rich local heritage and deep historical ties to the region. The story begins with Henry Summerville Dixon who was born in 1928- coincidentally the same year the Ringwood Clock Tower was erected as a memorial to those that served in the Great War. After completing his Law Degree at Melbourne University in 1952, Henry setup a legal practice in the Ringwood Anglican Hall in early 1953.

Henry’s emerging legal practice, H.S. Dixon, moved 6 weeks later to 121 Maroondah Highway for two years before a more permanent address was found in Unit 1 at the newly built Midway Arcade in 1955. Henry worked tirelessly as a sole practitioner for 46 years faithfully serving the Ringwood community until a decision was made to sell his practice to Grant Hutchinson in 2001.

The Hutchinson family heritage adds even more historical texture to the story with Grant’s forebears settling into the Maroondah area back in the 1860’s when the original Ringwood village began to emerge from recently sold pastoral land in the 1850’s. Grant’s great grandfather, John Hutchinson, also made a strong contribution to the community as Justice of the Peace in the 1920’s.

Grant John Hutchinson was born in 1963 and has lived most of his life in the area known as the City of Maroondah. Grant lives at Croydon Hills with his wife Wendy and their four children. Grant is passionate about the local community and was delighted to add yet another layer to the history pages by moving the Hutchinson Legal practice from Midway Arcade to the old doctor’s surgery opposite Eastland in October 2008.

Originally a vicarage, the property was sold to Dr Bill Hewitt in the 1920’s and was principally used as both a general practice and for consultative rooms for ante and post natal care for women. The newly refurbished premises at 10-12 Warrandyte Rd, opposite Eastland, continued the tradition of quality service and caring for the local community.

On 1 December 2009, Hutchinson Legal entered a new era with Con Nottas joining Grant Hutchinson as a Partner of the practice. Con and Grant have known each other and worked together at various times since 1996 when Grant offered Con his first position in the legal profession. Con lives with his wife Suzana and their two children in Blackburn South. Con is committed to providing a professional legal service to the local community. In 2018, Jason Lau joined the partnership, strengthening the growing practice. Jason and Amelia live locally with their two young children.

Part of Hutchinson Legal’s commitment to offering the highest level of service to their clients included the opening of an office in Melbourne’s CBD in March 2011. The location offers both convenience to an expanding city client base and will provide further scope to grow the Hutchinson legal team.

In May 2018, having outgrown the Warrandyte Rd premises, Hutchinson Legal moved to its current premises at 38 New Street, Ringwood, and was joined at the new location by sister firm, YourLawyer. The building at 38 New Street has been named the H.S. Dixon Chambers in honour of Henry Summerville Dixon.

In March 2019, Hutchinson Legal took over the Tunstall Square, Doncaster East, office of Mr David Boots, and we now hold the deeds and support the clients of the former practices of the Probate Professionals, S.B. Powell & Co, Brendan H. Hardiman & Associates and Victorian Estate Planners.

With a strong line-up of skilled legal practitioners and an unwavering commitment to providing legal solutions for life, Hutchinson Legal will continue to add more depth and strength to the community and to the historical pages of Maroondah and Doncaster East.

We seek to provide a high quality legal service for our clients at every opportunity. From the first consultation, we will be committed to finding the best possible legal solution for our clients and provide the highest level of client support, communication and service until the matter is resolved.
‍
Following the first consultation, you should expect to receive a Client Instruction Letter outlining the scope of the legal task that you have requested of us.  When the Client Instruction Letter is received, we encourage you to read it carefully and ensure it covers all aspects of the matter as instructed by you. You will then be requested to sign a copy of the Client Instruction Letter and return it to our office to confirm that it accords with your expectations and instructions.

We seek to maintain a legal service which allows clients to have access to their Hutchinson Legal Solicitor. In the event that the Solicitor is unable to be contacted at that time, we will ensure a message is sent to them directly so that you are contacted as soon as circumstances allow.

3
Understanding and Working with our Clients to Achieve a Result

We consider a successfully managed legal matter is a matter which achieves the best result for our client. Accordingly, we encourage clients to set out for us, when providing their initial instructions, their desired result. This will enable us to advise them of the likely cost of achieving that result. We can also advise of avenues available through negotiations.

We are committed to:

At Hutchinson Legal, we realise that whilst we can provide legal services to our clients, there are times when clients may require the assistance of other professionals. Accordingly, where appropriate, we will refer clients to other professionals such as accountants, valuers, environmental specialists, financial planners, etc. Naturally, we would only recommend other professionals after consulting with you.

We are committed to providing clients not only a high quality service, but also a cost-effective service. When appropriate, we will be pleased to provide an estimate of the likely cost of an action when we receive instructions. We are also able to discuss alternatives in which a matter may be dealt with so that legal services are provided in a way that suits your particular requirements.

We live and breathe our values. These are the cornerstones of everything we do.

We speak the truth in love, even when it is costly. We do to others what we would have them do to us. While it is an old axiom, we believe it is relevant today. Therefore, we consider client needs in a holistic manner and respond proactively in a pro-active way.

We are absolutely and unswervingly committed to excellence. We exist to serve. Clients can count on us to get the work done within cost estimates and in a timely manner.

Clients are our priority. We take the opportunity to identify the client’s needs beyond the legal services they are seeking and respond appropriately. We are concerned about broader needs and express this in practical ways. This extends to how we care for team members.

A kind word or two from our clients

"We are both most grateful to your practice and... services. [Elarya George] was so approachable, clear and proactive in dealing with [our] case. Elarya... provided clear information about her services, the costs and the process, and gave us great confidence in her being trusted to deal with the matter. She really was excellent from start to finish."

"Thank you Madelaine for your kind assistance and concern with this... I am most grateful and appreciative... that you were able to be there and... assist in this journey."

"I've experienced legal representation from you and your colleagues that I cannot fault. I have appreciated your guidance and not once have I felt that you didn't understand my circumstances... nor doubted the worth of my case."

"Thank you so much for your assistance, support and guidance throughout this long process... Your professionalism and dedication are second to none. On behalf of my Mum and my family, thank you."

"I could not have been happier with the team at Hutchinson Legal... individual steps were explained clearly, and every conversation was friendly and confidence inspiring. I cannot recommend you highly enough."

"I honestly cannot thank you enough for everything. You are professional in all you do and also a very caring person. I have given your name and number to other people and I hope they phone you because you are a Knight in shining armour and work wonders."

"It was a tremendous relief to benefit from your service. The way you were constantly adopting the most cost effective approach for the best outcome and your meticulous attention to details were both very much appreciated. I also appreciated the occasions when you went beyond your call of duty to ensure that all paperwork was prepared properly and submitted on time."

"You have been an invaluable help in putting all of this behind me and helping us achieve a satisfactory result. I would have no hesitation in recommending you personally to any friends or family in need of legal assistance."

"Thank you again for your professionalism and great client service. We are both thrilled with the outcome."

"[Your] sympathetic concern, prompt attention and expeditious handling of our requirements has made some trying times much easier to deal with."

"You have gone the extra mile with this case and it is difficult to know how to adequately express our appreciation."

"[The team] treated us as if it was their own Dad in trouble, and spent many hours working for us and achieving an amazing outcome." 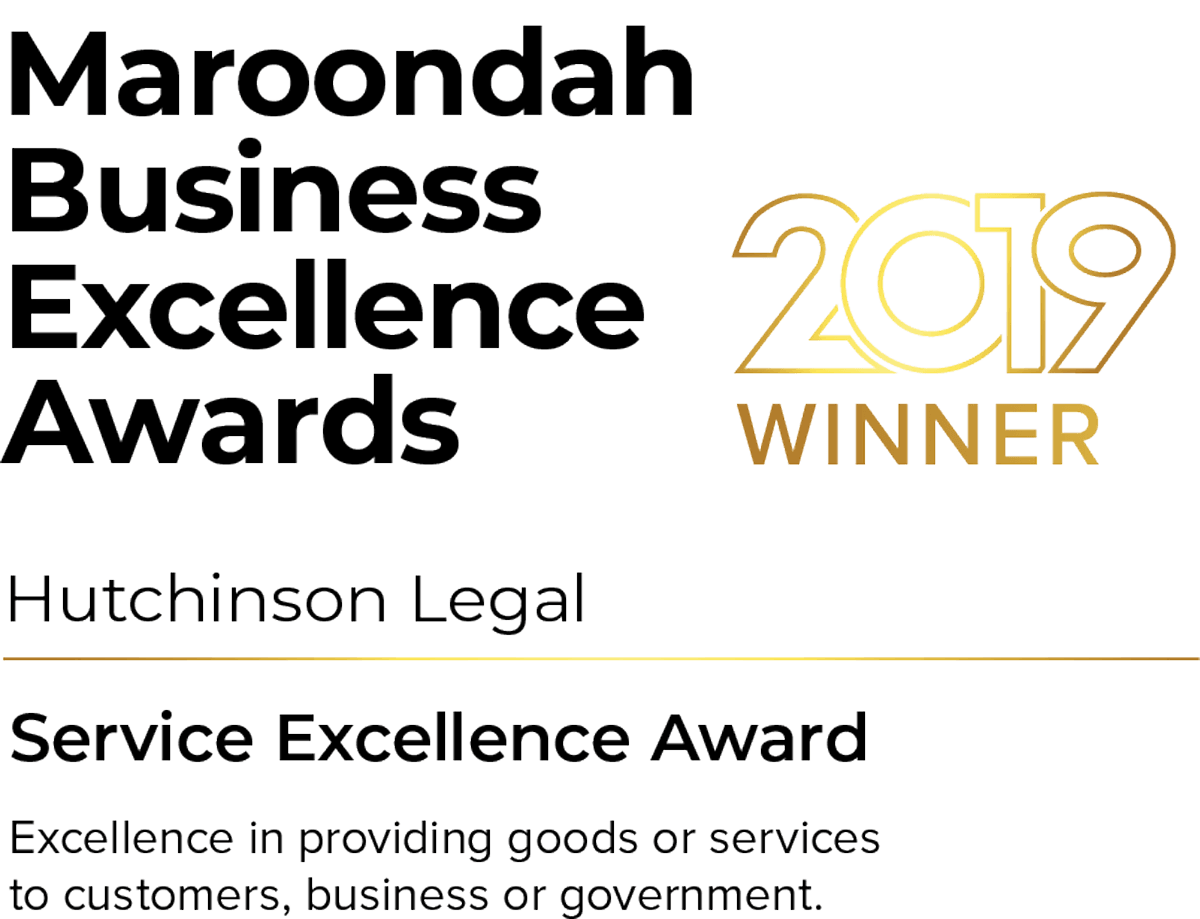 Hutchinson Legal was the Winner of the Maroondah Business Excellence Awards - Service Excellence category for 2019. It was a privilege and honour to receive this award, which was presented at the Maroondah Business Excellence Awards Gala Evening. It was an excellent event and we were surrounded by dozens of exceptional local businesses in a variety of categories. Our congratulations go to all the finalists, and particularly, to our sister firm, YourLawyer, who was a finalist in the Collaboration and Partnerships category.

We'll stand by you. 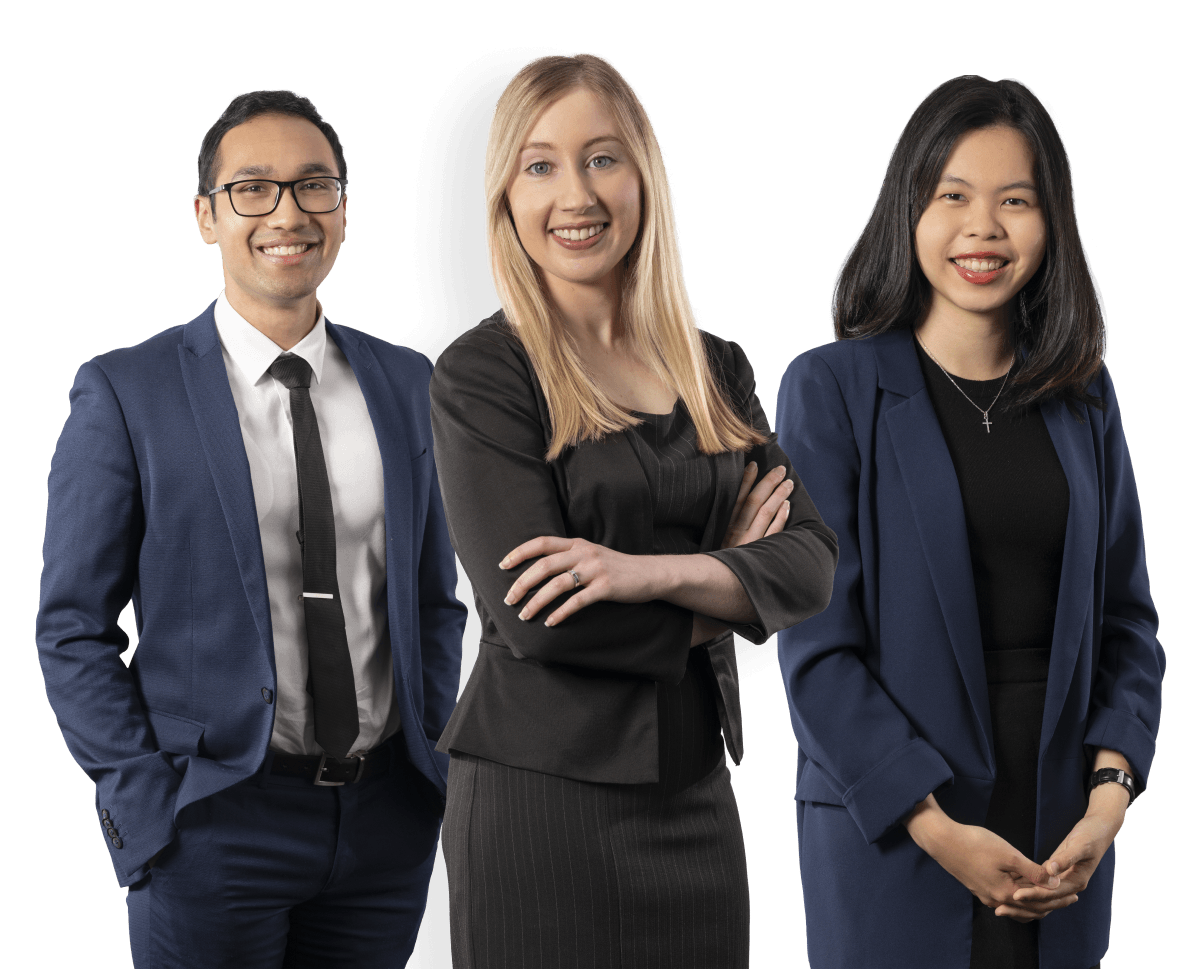